The JCC will be closed Monday, May 31. Happy Memorial Day Weekend!

Hadar Goldin – The Final Peace Exhibition at the J Details

To schedule a tour or for more information, please email info@phillyjcc.com

Experience the early works of military hero, Hadar Goldin, an IDF soldier killed and abducted by Hamas during Operation Protective Edge. Hadar was a talented artist and writer, and his work has been presented to the United Nations and shown through traveling exhibits around the world.

Tour the pieces here at the Kaiserman JCC in Wynnewood, and consider joining the programs highlighted below for an even more enriched experience.

The Life of Hadar Goldin

In August 2014, Hadar Goldin, then a 23-year-old-lieutenant in the Givati Brigade of the IDF, was kidnapped and killed in Gaza by Hamas terrorists just two hours after a cease-fire was declared in Operation Protective Edge war. Nearly eight years later, Goldin’s parents, Leah and Simcha Goldin, are still waiting in agony for the return of Hadar for burial in Israel.

This exhibition celebrates Hadar’s life and his prolific artistic talent. But equally as important, the family hopes the exhibit will raise awareness of his story and to call to bring Hadar Goldin and Oron Shaul home.

Hadar’s work has been shown in numerous venues around the world as a way to ensure that his story, and the atrocities committed by Hamas, don’t disappear from the headlines. Help celebrate the life and talent of Hadar Goldin, while also keeping his memory alive and building awareness about this horrific story.

The Kaiserman JCC and The Jewish Federation of Greater Philadelphia, in partnership with the Consulate General of Israel in New York and the Hadar Goldin Foundation, are bringing this exhibit to the Greater Philadelphia community. Tour these inspiring pieces between June 1 and June 17 at the Kaiserman JCC in Wynnewood. For even more enriched experiences, we invite you to join the following opportunities. Please register in advance; space is limited. 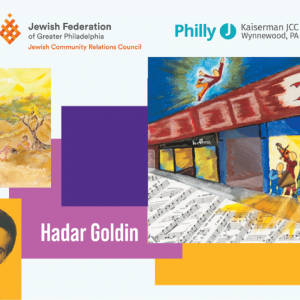 The health and safety of our community, staff and event attendees is our highest priority, so the event protocols will follow CDC guidelines. We request that all of our guests, vendors and staff age 5 and older be fully vaccinated when attending the programs. Due to the rapidly changing situation, updates will be given closer to the event.